The Stolen Wings series is on Sale! 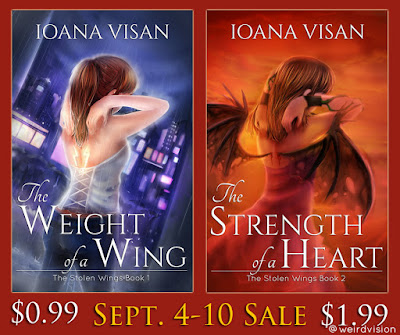 The image says it all. The Stolen Wings series is on sale on September 4-10. Get the books here:

Of course, both books are still free to read for Kindle Unlimited subscribers.
Posted by Weird Vision at 8:42 AM 0 comments
Email ThisBlogThis!Share to TwitterShare to FacebookShare to Pinterest 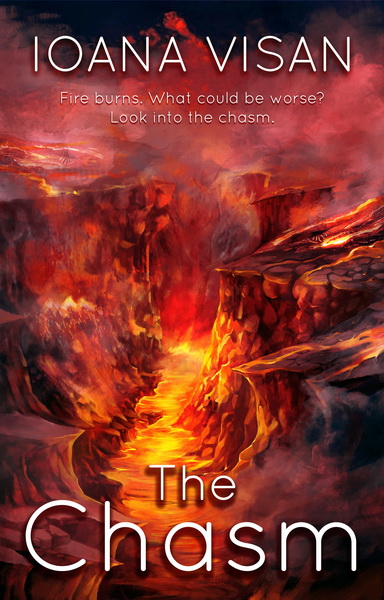 The Chasm
by Ioana Visan


On a distant planet, a discovery has been made that can change the industrial world as we know it, landerslide, a plant with properties just beginning to be uncovered, yet ones that may prove endless… and very profitable. The harsh terrain of the planet makes retrieval difficult, yet when the chasm opens and lava spews forth, it makes the operation impossible – and deadly.

Seanah Ward is a brilliant chemist, and possibly the only one alive who can solve the riddle of the chasm. Armed with science and a theory, she is sent with a team to the mining colony on a mission to cool the lava on the hostile world of flame and death. Once there, Seanah discovers that everything she was told is a lie. Her cousin is still dead, but the miners, whom she had been told were dead or deranged from the smoke, are alive. When they crash land while surveying the chasm, Seanah is left to pick up the pieces, salvage what she can from the wreckage and attempt the impossible.

Aided by Griff Hollander, chief commander of the Northside Fire Brigade, and Dex Sheppard, a geologist who currently leads the colony, Seanah must put her methods to work, trying to cool a flame that burns with the planets core. Yet the chasm seems to know they are there as it seeks them out with fireballs and terror. It’s a moving, breathing thing that stalks the planet, surrounding the colony, and appears determined to drown them all in its lava.

Fire burns. What could be worse? Look into the chasm.

Posted by Weird Vision at 8:12 AM 0 comments
Email ThisBlogThis!Share to TwitterShare to FacebookShare to Pinterest 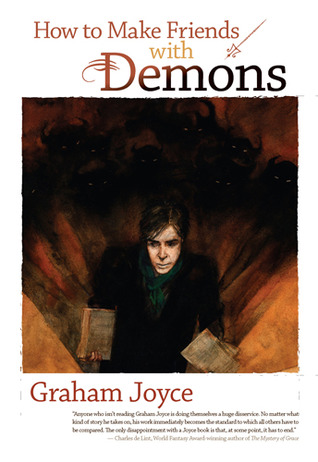 Magonia by Maria Dahvana Headley – Nice cover. Interesting core idea. Disappointing execution. Nothing happens in the first 10% of the book. Aza’s never ending stream of conscience is awfully annoying. There are no ordinary people in this book; everyone is special in some way. Love triangle and insta love. Ugh. Once she gets to Magonia, no one takes the time to explain anything to her. She’s sent directly to mop the floors. *facepalm* Weak worldbuilding that makes little sense. 2/5 stars

A Court of Thorns and Roses by Sarah J. Maas – This was my first encounter with Mrs. Maas’s writing style and I found it too dense and slow. I didn’t really care for the main couple. Lucien and Rhys were more interesting, though we only get each for half the story as if they couldn’t have been contracted for the whole book. Nesta would be a good match for either of them, hehe. And now I’m in the mood to watch Beauty and the Beast cartoon, which I haven’t seen in twenty years. 3/5 stars

How to Talk to Girls at Parties by Neil Gaiman – Beautifully written as usual despite the weird factor, but the story felt unfinished. 3/5 stars

A Tall Tail by Charles Stross – A lot of science was put into this one, which was fine, but I would have liked to be able to tell which was real and which was not. Alas, they don’t teach this kind of advanced chemistry in high school around here. 3/5 stars

Galaxis. Noua opera spatiala edited by Antuza Genescu – I liked George Lazar’s story best, no surprise there. Since I also have a story included in this short story collection, I won’t rate it.

I actually had some DNF this summer, which was disappointing because I was looking forward to read these books, but then for various reason, including voice and style, I discovered I couldn’t get interested in them and after several efforts, I gave up:
Time Salvager by Wesley Chu
Sleeping Giants by Sylvain Neuvel
Arabella of Mars by David D. Levine
The Fireman by Joe Hill
Map of Time by Felix J. Palma

The Way of Kings by Brandon Sanderson – Overly long and disjointed. I only cared for one POV character, some of them disappearing for half the book before getting back to them didn’t help at all, and the urge to turn the pages and the unexpected plot twists so familiar from Sanderson’s other books were absent here. 3/5 stars

How to Make Friends with Demons by Graham Joyce – This books basically shows you what it means to be human. I didn’t care for some parts and some plot points could have been exploited better, but one line in particular turned this book into a 4-star book for me. Why are demons always so sad and waiting? You’ll have to read the book to find out the answer. 4/5 stars

Traitor’s Blade by Sebastien de Castell – The banter became too much in places, but other than that it was a good read. Oh, and it comes with free fencing lessons! :) 4/5 stars

Prince of Shadows by Rachel Caine – I never cared for Romeo and Juliet’s story, but I quite liked Benevolio in both French musicals so the idea of the story being told from his POV sounded interesting. Unfortunately, I prefer Benevolio more mainly and playful than this scared boy who too often whined like a girl. Some of the plot twists were good and partially explained the insanity in the original play, but too many characters, relationships, and plot points were underdeveloped, the magic added nothing to the plot, and the ending felt rushed. I need to make time to rewatch those musicals. 3/5 stars
Posted by Weird Vision at 9:44 AM 0 comments
Email ThisBlogThis!Share to TwitterShare to FacebookShare to Pinterest


Yes, ladies and gentlemen, The Chasm is done! :D I've tripled my daily word quota on Friday just to finish it before the weekend. I'll work on the second and third draft in September, and then my editor will get her hands on it in October. Until then, stay tuned for a cover reveal on Thursday, September 1st, including the book description and the pre-order link. The newsletter subscribers will also receive an excerpt and an option to request an ARC.

Next on my writing agenda are three more installments of Law and Crucible Saga. The plan is to have them out for Christmas along with a Broken People short story. I don't know if it's entirely doable since these aren't only short stories but enter well into novella territory and I only have the first one plotted in detail so far, but I do know what's supposed to happen in the other two as well. If they're not ready by the end of December, they will definitely be released in January. I know you were hoping for the final novel in the Broken People series to be out this year, and so was I, but The Chasm took double the time assigned for writing it and delayed my plans. 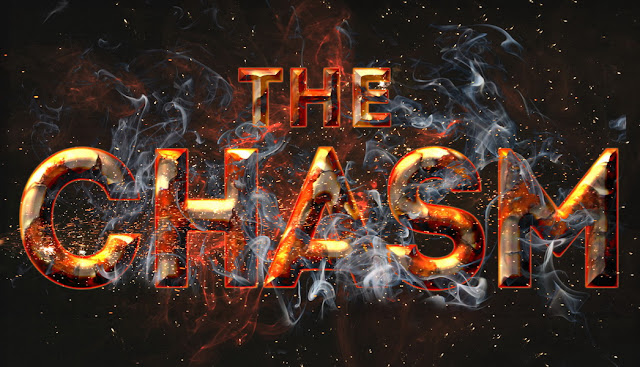 Posted by Weird Vision at 8:45 AM 0 comments
Email ThisBlogThis!Share to TwitterShare to FacebookShare to Pinterest

The Devil You Know Series is Free for a Limited Time! 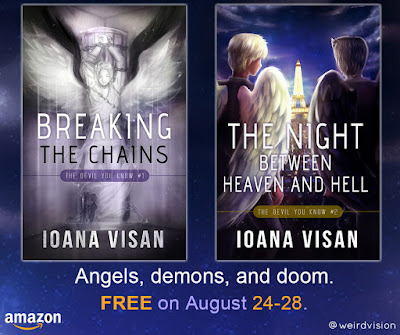 On August 24-28, you can download for free from Amazon the two short stories in The Devil You Know series:

The Night Between Heaven and Hell

Feel free to spread the word and leave a review if you read them!
Posted by Weird Vision at 8:45 AM 0 comments
Email ThisBlogThis!Share to TwitterShare to FacebookShare to Pinterest

The Nightingale Circus and Law and Crucible Saga News

If you're looking for a summer read or an introduction to Broken People series, The Nightingale Circus can be downloaded for free until August 9 from instafreebie.

August is the last month you can read Law and Crucible Saga for free on Kindle Unlimited.
Posted by Weird Vision at 9:16 AM 0 comments
Email ThisBlogThis!Share to TwitterShare to FacebookShare to Pinterest 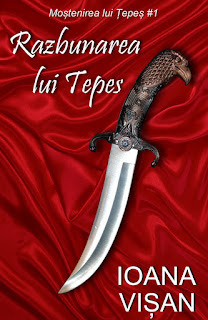 If you have a Twitter account, today you can nominate "Razbunarea lui Tepes" for Wattys Awards by tweeting:

Last week - Smashwords Summer Sale - 12 titles 50% off and more!
https://www.smashwords.com/profile/view/ioanavisan
Click on each title to see the discount. 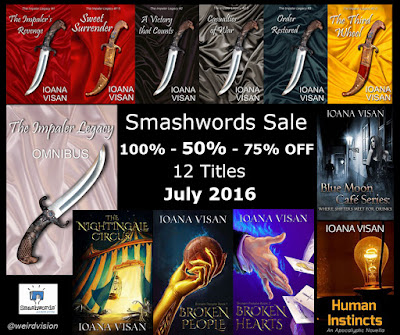 Posted by Weird Vision at 4:34 PM 0 comments
Email ThisBlogThis!Share to TwitterShare to FacebookShare to Pinterest

A mini-site for my Romanian readers

My site is getting crowded with all the titles I've published in the recent years, and so does my blog. I also think the visitors feel a bit lost because of the mix of Romanian and English titles. Since the main site is in English and I don't have time to translate the whole thing, I quickly threw something together:

This wordpress site is focused on my Romanian books and it's in Romanian because my Romanian readers deserve to have all the information in one place and this way they can easily find me and my books.

The official website remains the best place to go for all the details though, and the blog remains the same. 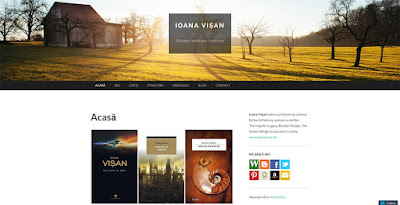 Posted by Weird Vision at 10:34 AM 0 comments
Email ThisBlogThis!Share to TwitterShare to FacebookShare to Pinterest 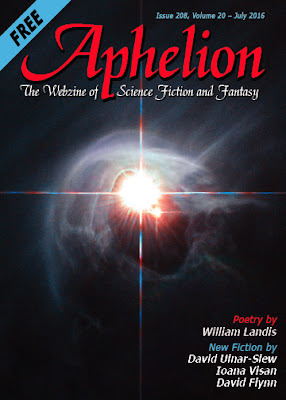 Exactly eight years and four days ago, I was celebrating my debut as a writer when my first short story was published in a magazine. It's been a long road since; I've learned a few things and, hopefully, preserved my humor and positive view over the world intact.

Today, I'm happy to announce that my short story That Damned Toothbrush... was published in July issue of Aphelion webzine. This should please my English-speaking readers, especially those who have expressed their interest in reading my Romanian stories. The Romanian version of this story was included in my short story collection Efectul de nautil (Millennium Books, 2013).

Go here to read about an atypical guest and have a few laughs. While you're at it, check out the rest of the issue, too. There's some good stuff in there.
Posted by Weird Vision at 6:01 PM 0 comments
Email ThisBlogThis!Share to TwitterShare to FacebookShare to Pinterest

The Chasm
Pre-order it on Amazon.
Add to Goodreads.

Subscribe to the Newsletter and Get a Free Ebook

The Night between Heaven and Hell
(The Devil You Know, #2)
Amazon

The Strength of a Heart
(The Stolen Wings, #2)
Amazon, Createspace,
Barnes and Noble

Breaking the Chains
(The Devil You Know, #1)
Amazon

The Weight of a Wing
(The Stolen Wings, #1)
Amazon, Barnes and Noble, CreateSpace